Once upon a time, Na Kluea was a fisherman’s paradise with emerald green, crystal clear waters and an abundance of sea life for the local fishermen to harvest.

But fifty or so years ago, the area began to morph into a popular tourist destination beginning with the arrival of U.S. soldiers who visited the region ‘on leave.’

This introduction of newcomers led to an unprecedented wave of tourism in nearby Pattaya. This, coupled with a gradual move toward industrialization, altered the region dramatically. Eventually, the rich local ecosystem had disappeared. The once emerald waters had turned dark and murky, and the sea life that had been abundant for the local fishermen moved elsewhere.

Even as the sea life left the area, the number of fishing trawl boats increased. This increase in trawling further threatened the remaining marine life.

Fast forward to the present day. Mr. Boon-Ma Kosem leads a group of local fishermen in Na Kluea village. He and his group have been developing Fish Aggregating Devices (FADs) hoping their efforts might reverse the mass exodus of sea life.

Fish aggregating (or aggregation) devices are commonly utilized in both recreational and commercial fishing. FADs are a man-made technology used to attract fish and other aquatic animals. FADs usually consist of buoys that are tethered to the ocean floor with concrete blocks. Sea creatures tend to gravitate to FADs and move around them in a variety of orbits.

Recent evidence has shown that since FADs have been deployed in Na Kluea, some of the fish that were considered long gone are starting to return to the region. Now larger fish and even lobsters that hadn’t been seen for more than a decade are making a comeback.

On Saturday, June 22, Yannix Volunteers will visit Na Kluea as part of Give It 2 Get It #27 where they will spend the morning building FADs under the direction of Mr. Boon-Ma Kosem. And in the afternoon, the Volunteers will deploy the FADs that they assembled earlier in the day.

Yannix is excited about the prospects of exploring how this FAD technology can be deployed to help solve a difficult problem.

To learn more about how YOU can make a difference, please contact us at: ‪‪ynxg2g@yannix.com‬ 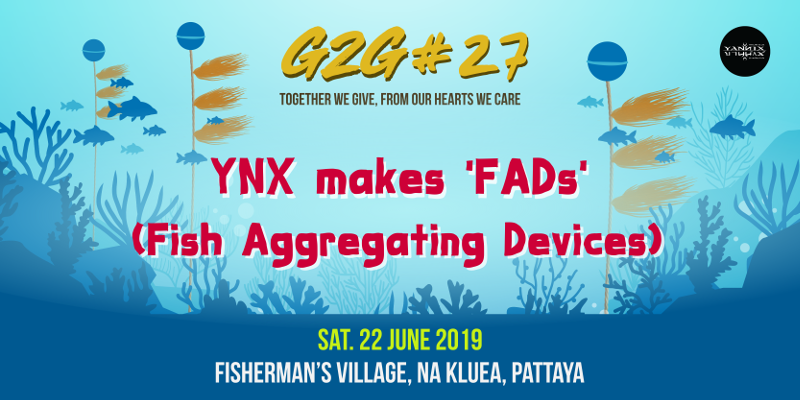